Originally born in Vietnam, pho is a dish now found in cities around the world. It features a rich, savory, aromatic broth, along with rice noodles, thinly sliced beef, and an assortment of fresh veg, such as onions, scallions, bean sprouts, and Thai basil.

We’ve enjoyed a large bowl of pho in cities ranging from Boulder, Colorado, to Berlin, Germany. Since it’s often and easily made gluten-free, it has become a go-to option when traveling, whether for business or pleasure. But alas, it isn’t always GF. For example, the Vietnamese restaurant just 5 minutes from our home swaps a lighter, blander broth when making the GF version. It’s still good, but not as good as their “real” thing.

This recipe coaxes all the delicious flavor of an authentic Vietnamese pho out of your home kitchen, where you can rest assured it’s always 100% gluten-free. 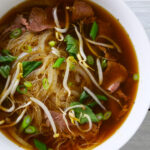 To finish the pho: