Today’s cookbook review is LONG overdue. We originally intended to post it just before Christmas, but then we dropped off the face of the earth for two months or so, and so here we are. Our focus in this review is Grain-Free Baked Goods & Desserts by Kelly Brozyna of The Spunky Coconut.

We first met Kelly in person—and tasted her baking—at a small blogger get together at her house back when we were still living in Colorado. The island in her kitchen had an inviting tray of slices of her marble cake. It was quite tasty. I thought then—as now—that Kelly’s take on gluten-free ingredients and baking methods were pretty innovative.

Grain-Free Baked Goods & Desserts offered a chance for us to try her ingredients, methods, and recipes in our own kitchen. The book is self-published (though you’d never know it from the high quality), with layout handled by her book designer husband Andrew. It’s about 100 pages long, with 80 recipes, and nearly 40 food photos (with some additional technique and family pictures). All of the recipes are grain-free, gluten-free, and casein-free. Many are egg-free. (Some that use eggs use a lot of eggs.)

Now, on to the food:

First up, we made the Prairie Waffles. They were dense and spongy, with a very eggy taste. In our Belgian waffle iron, they tended to go from moist to very dry in a heartbeat. They were best eaten hot and very fresh. They sucked up maple syrup. Although they looked great, their taste and texture weren’t as successful for us as some of Kelly’s other recipes. Next up we made the Rosemary & Garlic Rolls. The dough was initially much too wet to form the dough into balls as per the recipe, and we had to add some extra flour to get it to a workable consistency. The resulting rolls were very dense. The flavor of coconut flour was most prominent for us. The flavor of rosemary was pretty weak, and the garlic almost nonexistent. The rolls had a subtle sweetness to them, rather than being a truly savory dinner roll.

With this recipe, we found ourselves sometimes desiring more specific information. For example, one of the final steps instructs you to “Bake for X minutes.” On what type of pan? What size pan? Greased or ungreased? How far apart should you space the rolls? Will they hold shape or meld into one another if placed too close? (Another recipe had an inconsistent ingredient quantity, noting 1/2 cup coconut sugar in one place, and 1/4 coconut sugar in another.) Then came Kelly’s Pumpkin Spice Cake, which we made into muffins. Unlike the rolls, which were made with coconut and almond flours, the cake was made with beans. Even when fully cooked, the muffins were moist to the point of being squishy. Giving them even more time in the oven may help with that. Because they were so moist and tender, they tended to tear apart as you tried to remove the paper liner. The flavor was good, however. The muffins were paired with a frosting made with walnuts, cinnamon, honey, and cashew milk. It wasn’t the most photogenic of frostings, and for Kelli and me the frosting slightly missed the mark on texture. On the other hand, Marin and Charlotte ate this frosting literally by the spoonful as enthusiastically as they eat traditional, full-fat, full-sugar frostings. They gave it a hearty two spoons up. 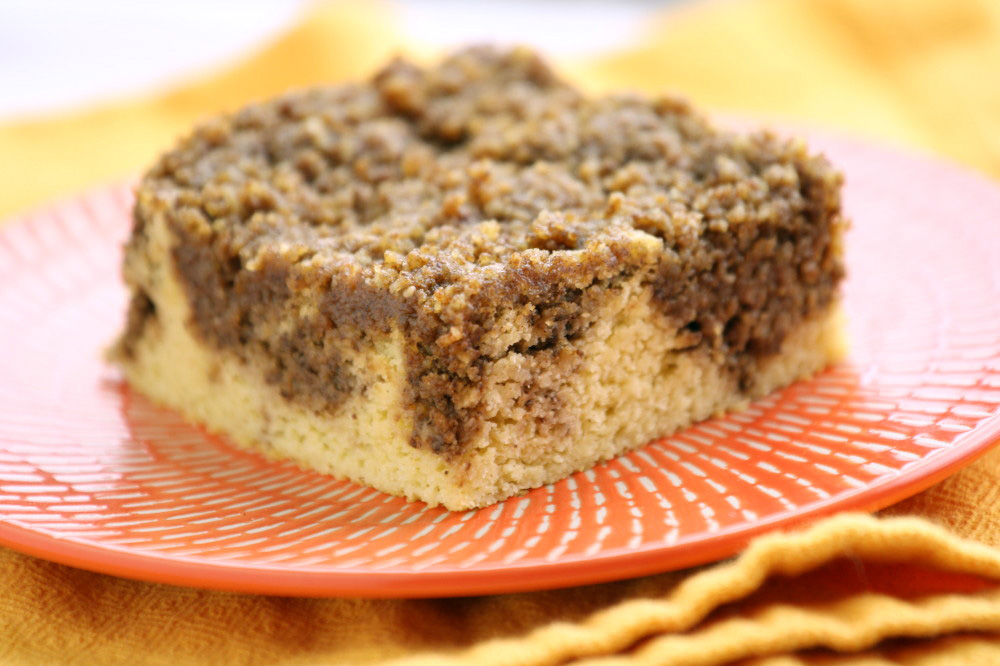 Lastly, we made the Coffee Cake. I emailed Kelly in advance of testing her recipes and asked, If we make one recipe from the book, which one should it be? Without hesitation she responded the coffee cake, which was her family’s favorite. Kelly’s advice was spot-on, and it was easy to see why this recipe was a family favorite in the Brozyna household.

The cake is based on her vanilla bean cake, which is a bean cake that is vanilla flavored, rather than a cake that is flavored with vanilla bean. The topping uses walnuts, ghee or coconut oil, coconut sugar, and cinnamon. The resulting coffee cake had beautiful texture, perfect moistness, good crumb, wonderful flavor. It wasn’t just a home run; it was a grand slam. And believe it or not, it tasted even better on days 2 and 3, after the flavors had a chance to meld, than it did on day 1.

We loved this cake so much that we brought some with us as part of our dessert offerings for my family’s big Sicilian Christmas Eve celebration. Someone at the party even asked us for the recipe! Since then, we’ve made the cake again … a sure sign of our approval of this recipe.

Finally, Kelly’s book is a great example of the cross-pollination and inspiration that takes place in the world of food. We write a lot in our cookbooks about family heritage recipes that pass down through generations, and about dishes inspired by friends, and about yet other dishes inspired by our travels. But we also find inspiration and influence in the gluten-free community around us. Kelly has become one of those influences.

What you don’t see when we write about testing specific recipes are the broader behind-the-scenes influences. Since first testing Kelly’s recipes for this review, there’s been a small culture shift in the Bronski kitchen. If you look in our refrigerator and our pantry, you’ll still find all the familiar ingredients we cook with so often; you’ll still find us making our classic recipes. But in any given week, there’s a good chance you also might find beans soaking in our fridge. And I can guarantee that you’ll find freshly made almond milk that Kelli whipped up, as per Kelly’s instructions. That perhaps speaks as loudly as any discrete recipe critique we might offer.

And so, how do we rate Kelly’s book? In the interest of trying to quantify our subjective experience (as we’ve done for other cookbook reviews), we’re using a five star ratings scale, with points earned as follows:

And so, how does Grain-Free Baked Goods & Desserts rate?

Kelly’s book has a very specific perspective on gluten-free baking (grain-free, casein-free, alternative natural sweeteners, etc.). She’s an innovator when it comes to making “traditional” foods such as cakes and waffles using “non-traditional” ingredients such as beans. For us, some such recipes were more successful than others, and in the case of the coffee cake, we can’t sing praises high enough. But the value in her cookbook goes beyond the individual recipes. It is also a window into the Brozyna kitchen, and into Kelly’s insights into healthful gluten-free baking. You may or may not find yourself making the recipes themselves day in and day out, but you just might—as we have—find yourself blending almonds and water in a blender on your kitchen counter to make from-scratch almond milk when you never gave serious thought to doing so before.