Crostini is Italian for “little toasts.” They can be properly toasted (such as on a sheet pan in your oven) or grilled (our preference). Either way, they’re delicious… whether on their own, topped with lox, spread with tapenade, or our favorite, paired with bruschetta.

The recipe itself is delightfully simple. The trick is starting with a good loaf of gluten-free baguette (like our recipe, which we made for these photos). The bread matters, since that’s the essence of crostini. 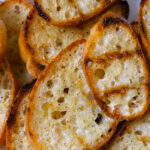